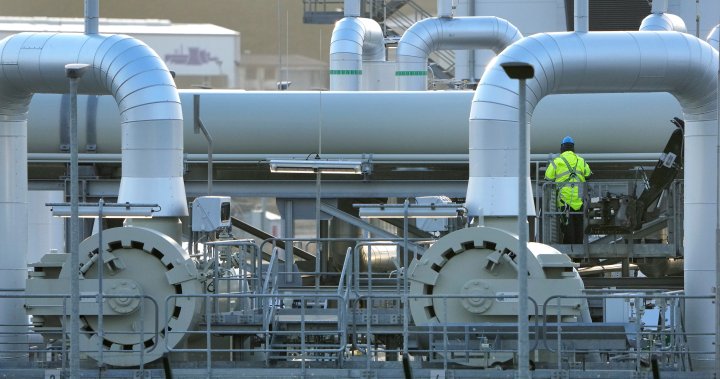 Ukraine‘s energy and foreign ministers are condemning the decision by the Canadian government to allow Germany to return controversial turbines being serviced in Canada to Russia‘s Gazprom.

In a statement published on the Ukrainian government’s energy ministry website Sunday afternoon, the ministers said they were “deeply disappointed” by Canada’s decision and urged the government to reverse it. In the statement, they added that returning the turbine would amount to adjusting the sanctions imposed on Moscow “to the whims of Russia.”

Gazprom has blamed the turbines for its decision to halve the flow of gas to Germany, which is heavily dependent on Russian natural gas and recently declared an “alarm stage” over looming gas shortages.

The turbines from the Nord Stream 1 pipeline had been sent to Montreal for a scheduled overhaul but their return has been complicated by sanctions imposed on Russia over the war in Ukraine. Germany has pressed Canada to let it return the turbines to Russia despite the sanctions and despite Russia’s continued assault on Ukraine.

Canada’s minister of natural resources, Jonathan Wilkinson, said in a statement late Saturday that “Canada will grant a time-limited and revocable permit for Siemens Canada to allow the return of repaired Nord Stream 1 turbines to Germany.”

That, Wilkinson said in the statement posted on Twitter, will support “Europe’s ability to access reliable and affordable energy as they continue to transition away from Russian oil and gas.”

He said that “absent a necessary supply of natural gas, the German economy will suffer very significant hardship.”

Siemens says it will aim to get the turbine back as soon as possible.

“The political export decision is a necessary and important first step for the delivery of the turbine. Currently, our experts are working intensively on all further formal approvals and logistics,” Siemens Energy said in a statement.

“Among other things, this involves legally required export and import control procedures. Our goal is to transport the turbine to its place of operation as quickly as possible,” it added.

Siemens Energy said after Gazprom started reducing gas flows in mid-June that it had been unable to return a gas turbine that powers a compressor station on the pipeline, which had been overhauled after more than 10 years in service, to the customer, Gazprom.

German politicians have dismissed the Russian explanation for the 60 per cent reduction in gas flows through Nord Stream 1, saying that equipment shouldn’t have been a significant issue until the fall and the Russian decision was a political gambit to sow uncertainty and push up prices.

“We must not fool ourselves: The cut in gas supplies is an economic attack on us by (Russian President Vladimir) Putin,” Economy Minister Robert Habeck said in a statement last month, adding Germans would have to reduce consumption.

Gas rationing would hopefully be avoided but cannot be ruled out, Habeck said and warned:

“From now on, gas is a scarce commodity in Germany … We are therefore now obliged to reduce gas consumption, now already in summer.”

The Canadian move comes before Nord Stream 1 is due to shut down for annual maintenance on Monday.

In previous summers, the work led to a roughly 10-day shutdown, but German Vice Chancellor Robert Habeck has said he suspects that Russia may cite “some little technical detail” as a reason not to resume gas deliveries.

The reduction in gas flows comes as Germany and the rest of Europe try to reduce their dependence on Russian energy imports. Germany, which has Europe’s biggest economy, gets about 35 per cent of its gas to power industry and generate electricity from Russia.

Last month, Habeck activated the second phase of Germany’s three-stage emergency plan for natural gas supplies, warning that Europe’s biggest economy faced a “crisis” and storage targets for the winter were at risk.

With files from The Associated Press.

2:12
Germany warns of gas rationing if Russia turns off taps