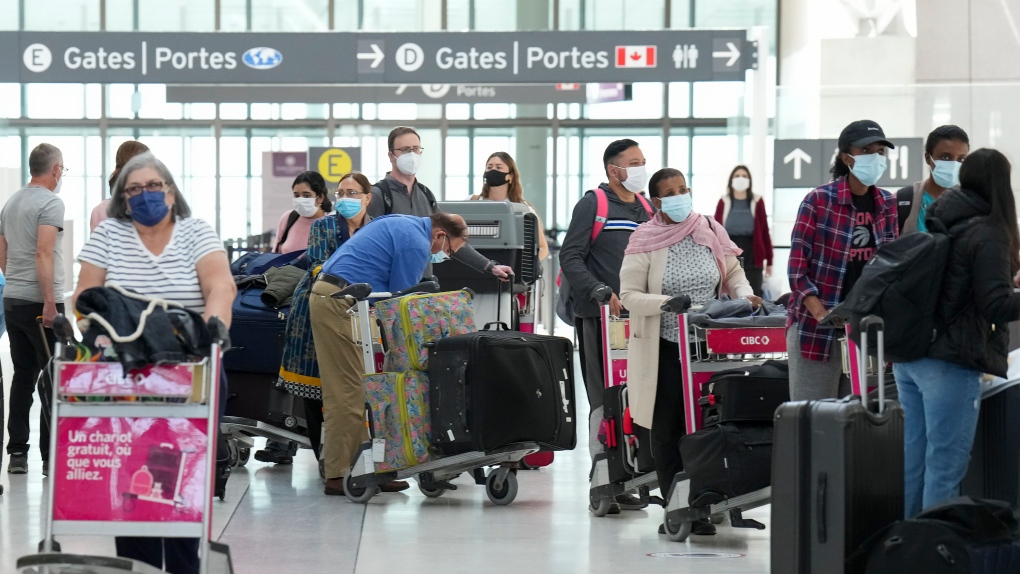 If you’re flying into Toronto Pearson International Airport today, you may have to slightly adjust your itinerary before you set foot in the city.

The measure was paused by the federal government on June 11 and resumed Tuesday in Toronto, as well as at airports in Vancouver, Calgary, and Montreal.

The process is slightly different than before, however.

In the past, travellers’ passports would be marked at random by customs for onsite testing.

Now, travellers who qualify as fully vaccinated will get an email notification within 15 minutes of completing their customs declaration letting them know that they have been selected for the test.

The test itself won’t take place at Pearson though — which is welcome news to the Greater Toronto Airport Authority (GTAA), the group that runs the airport that has been plagued by delays for months now.

RELATED: How delays at Pearson Airport got so bad: Aviation experts weigh in

People wait in line to check in at Pearson International Airport in Toronto on Thursday, May 12, 2022. THE CANADIAN PRESS/Nathan Denette

If you happen to receive an email after you clear customs, the message will contain information to help you arrange a test in your area.

“In it [the email], it’ll say, ‘you’ve been chosen’ and you either go to a pharmacy or a company that’s been selected to go to, or a virtual at-home test. You have to do it within 24 hours and get the results back in and then, of course, wait and see if you’re positive or negative,” Martin Firestone, president of Travel Secure Inc., told CP24 on Tuesday morning.

And if you do test positive for COVID-19, you’ll have go into isolation for 10 days from the date of the test result — even though the isolation period in Ontario following a positive test is five days.

The rules taking effect today won’t change the process for partially vaccinated and unvaccinated travellers. Those individuals will continue to be required to get a test upon arrival into the country and on day eight of their mandatory 14-day quarantine.

It’s unclear how long random COVID-19 testing will be in place at Pearson, though a spokesperson for the GTAA told CTV News Toronto last week that the move to off-site swabs was “helpful.”

“This, along with increased CBSA staffing, contributed to lower wait times for planes that need to be held on arrival due to high passenger volumes in the customs hall,” Tori Gass said in a statement at the time.

Despite the fact that the random testing will no longer be done onsite, Firestone says it is still a “major inconvenience” if you are selected.

“No doubt, many could rethink the decision to come to Canada. Not only the ArriveCan doc, which is still out there and a lot of people aren’t happy about it, add this to the mix now and you’ve just got another layer, another restriction, and it makes travel just that much more difficult when you decide to come here,” he said.

EXTENDED: Canada will keep ArriveCan for its data on COVID-19-positive travellers, sources say

Canadian officials have said that random mandatory testing is key in detecting new variants coming in to the country. And, amid a seventh wave of COVID-19 in Ontario, it doesn’t seem the measure will be going anywhere anytime soon.

Meanwhile, a new Ipsos poll shows that 70 per cent of Canadians now believe the situation at airports across the county “is an embarrassment to Canada,” and nearly 60 per cent of respondents are avoiding flying until they see improvements.