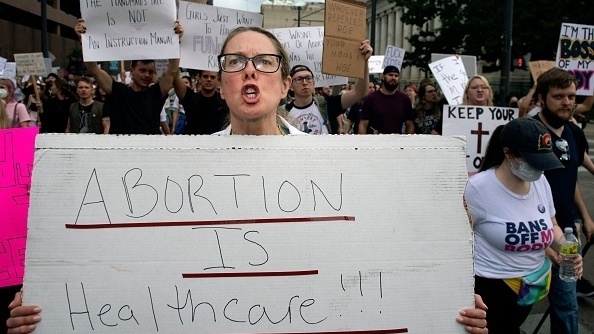 Dr. Kara Beasley protests the overturning of Roe vs. Wade by the U.S. Supreme Court, in Denver, Colorado on June 24, 2022.

Dr. Kara Beasley protests the overturning of Roe vs. Wade by the U.S. Supreme Court, in Denver, Colorado on June 24, 2022.

Historically, doctors have played a big role in abortion’s legality. Back in the 1860s, physicians with the newly-formed American Medical Association worked to outlaw abortion in the U.S.

A century later, they were doing the opposite.

In the 1950s and 1960s, when states were liberalizing abortion laws, “the charge for that actually came from doctors who said, ‘This is insane, we can’t practice medicine, we can’t exercise our medical judgment if you’re telling us that this is off the table,’ ” explains Melissa Murray, law professor at New York University.

The Supreme Court ruled in doctors’ favor in Roe v. Wade in 1973. The majority opinion spoke of “the right of a woman in consultation with her physician to choose an abortion,” Murray says.

Yet doctors and patients are all but absent from the latest Supreme Court majority opinion on abortion in Dobbs v. Jackson Women’s Health Organization. In fact, in the opinion, Justice Samuel Alito uses the derogatory term “abortionist” instead of physician or doctor or obstetrician-gynecologist.

Legal experts say that signals a major shift in how the court views abortion, and creates a perilous new legal reality for physicians. In states where abortion is restricted, health care providers may be in the position of counseling patients who want an abortion, including those facing pregnancy complications, in a legal context that treats them as potential criminals.

“Alito’s framing is that abortion is and was a crime – that’s the language he uses,” says Mary Ziegler, a law professor at the University of California, Davis. There’s no dispute, she says, that “the result of a decision overruling Roe in the short term is going to be the criminalization of doctors.”

Doctors were at the heart of the court’s first landmark ruling on abortion, Roe v. Wade.

“The original Roe decision – it was very, very doctor-centered – extremely so,” says Ziegler, who has written extensively on the legal history of abortion. “At its inception, this was a right that was very much about health care and about the doctor-patient relationship.”

Roe and the abortion decisions that came after it like Planned Parenthood v. Casey, “had the framework that abortion is some sort of individual right, but it’s also health care,” explains Carmel Shachar, executive director of the Petrie-Flom Center for Health Law Policy, Biotechnology, and Bioethics at Harvard Law School.

The court essentially told states: “You can put restrictions on abortion services and on provider qualifications as you do for other types of health care, and as long as they are not so onerous that we think they’re implicating Roe and Casey, we’re fine with that,” Shachar says.

State legislatures that wanted to restrict abortion did so using the apparatus of health care regulation, she says.

The effort to restrict abortion through medically unnecessary regulations – “was simultaneously, I think, treating abortion as health care and delegitimizing the idea that abortion is health care,” Ziegler says.

These regulations often tried to control the details of how doctors provide abortions more strictly than other areas of medicine, she notes. “The anti-abortion movement’s framing was basically, ‘We’re protecting women from the ‘abortion industry’ by regulating the way abortion providers work.’ “

A more recent abortion decision – Gonzales v. Carhart in 2007 – previewed the Supreme Court’s move away from deferring to doctors in the context of abortion, Ziegler says. At stake was the legality of so-called “partial birth abortion,” a procedure used to perform late-term abortions, which Congress had banned in 2003.

“The fight in that case was about whether doctors get to define what this procedure is and whether it’s needed for patients or whether Congress does,” she says. “The Supreme Court in the case essentially says, if there’s any kind of disagreement about science – legislators get to break the tie.”

In Dobbs, the latest decision about abortion from the Supreme Court, “it’s an even bigger breach because there’s not even the pretense of caring about doctors,” she says.

Supporters of the Dobbs opinion don’t see the absence of physicians as an omission. Abortion “really doesn’t have any place in the practice of medicine,” Dr. Christina Francis of the Association of Pro-Life Obstetricians and Gynecologists told NPR after the decision was released. Her group submitted an amicus brief in the Dobbs case, which urged the court to overturn Roe v. Wade.

In his opinion for the majority, Alito quotes the Mississippi law banning abortion after 15 weeks, which called abortion “a barbaric practice, dangerous for the maternal patient, and demeaning to the medical profession.”

Ziegler says the idea has been percolating for years in the anti-abortion movement “that abortion was not medicine, was not health care.” She says it was fueled in the 1980s when Bernard Nathanson, a doctor who formerly provided abortions, had a political and religious conversion.

“He wrote this book in the ’80s called Aborting America, which was what he called an exposé of the ‘abortion industry,’ ” she explains. “That term really caught on with the anti-abortion movement – that essentially abortion was a for-profit industry, kind of like the tobacco industry.”

That idea has continued to be powerful and its influence is apparent in Dobbs, she says. Alito’s opinion reflects the idea that “abortion providers are not doctors in the sense we usually understand – that they were historically thought of as criminals and what they’re doing is unprotected.”

Many doctors and legal analysts adamantly disagree with Alito’s view. Two dozen medical groups, including the American College of Obstetricians and Gynecologists and the American Medical Association, told the court that abortion is a key part of reproductive health care, that it is safe, and that doctors need to be able to treat patients without government interference.

“I think the failure to consider the interests of the pregnant person and of the clinicians that treat them [in the majority opinion] was glaring,” says Molly Meegan, chief legal officer and general counsel at ACOG. She adds the use of the term “abortionist” in the opinion was “inflammatory, inaccurate – these are clinicians, these are providers, these are medical professionals.”

Shachar at Harvard takes issue with the “history and traditions” approach Alito used in his analysis to determine that abortion is not a protected right, focusing on statutes from the 19th century.

“Medical care has just changed so dramatically from – bite a bullet and we’ll amputate your leg,” she says. “It’s really shocking to say, ‘We need to go by the historical conception,’ when we have all agreed that we want to live in a modern society that has medical care, that doesn’t treat women like chattel.”

Michele Goodwin, who directs the Center for Biotechnology and Global Health Policy at UC Irvine, says Dobbs and the state abortion laws that can now take effect single out physicians who provide abortions “for disparate treatment amongst various other kinds of care.”

“That would be one thing if, in fact, these were very risky procedures that led to high rates of mortality, but, in fact, it’s just the opposite,” she says. Abortion is very safe, she adds, pointing out that pregnancy leads to death 14 times more often than an abortion. That means that doctors who provide abortions “are absolutely essential, actually, in the provision of reproductive health care,” she says.

The role of doctors ahead

Physicians who provide abortions are in an incredibly difficult spot as they try to navigate the new legal landscape, especially in cases where a pregnant patient is sick or has complications. Intervene, and you risk violating the law and being sued, losing your medical license, even going to jail. Don’t intervene and you could be risking your patient’s life, and potentially being sued by the patient or family.

“We are hearing from our doctors on the ground at all times of day and night,” says Meegan of ACOG. “They are scared, they are in an impossible situation, and they don’t know how to define laws that are happening by the minute.”

Dr. Katie McHugh is an OB-GYN who provides labor and delivery and abortion care at several clinics around Indiana, where abortion is currently still legal. Since the Supreme Court decision, she’s seen a wave of new patients coming from Ohio, Tennessee, and Kentucky for abortion care. She’s trying to keep track of the laws in these neighboring states to know what she can do for these patients.

“We’re trying to be very, very careful,” she says. “Especially as things are evolving, I’m sure that I have made a mistake. And it is so scary to me to know that I’m not only worrying about my patients’ medical safety, which I always worry about, but now I am worrying about their legal safety, my own legal safety.”

“The criminalization of both patients and providers is incredibly disruptive to just normal patient care,” she adds.

The legal landscape is very much in flux. Bans are going into effect, some have been blocked by judges, and new restrictions are being drafted by state lawmakers. The laws that are in effect are often confusing and unclear, and doctors warn that is likely to affect care beyond abortion, including miscarriage care and treatment for ectopic pregnancy and more.

It could be that doctors’ groups like the American Medical Association and ACOG get involved in the legal fight here and again play a role in pushing to liberalize abortion laws, just like they did decades ago.

“I think that medical societies have a responsibility and an influence that should be used right now,” says Meegan. She notes AMA recently adopted a resolution that defines abortion as a human right, and that many organized medical groups across specialties are united in fighting against the criminalization of medical care.

“Recent political and legal mobilizations around abortion have not been led by doctors,” notes Ziegler. “Historically, doctors have been a really big reason abortion was decriminalized before, and if [they’re] going to be again, I think you have to have the medical profession potentially be more outspoken and united in talking about this than it has been to date.”