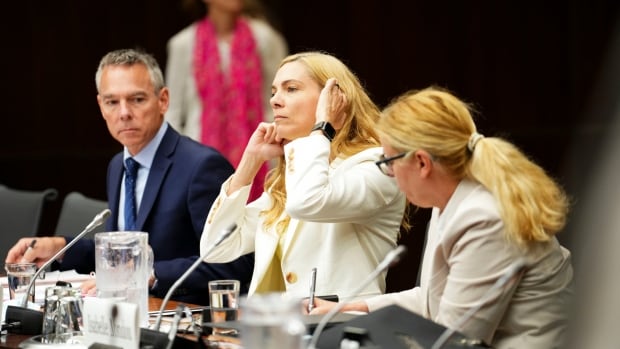 A third-party investigator hired by Hockey Canada to look into an alleged group sexual assault said players who don’t participate in her investigation will be banned from Hockey Canada for life — and that many players she hasn’t interviewed are worried that Hockey Canada and some politicians have pre-judged them guilty.

Danielle Robitaille, a partner at law firm Henein Hutchison LLP, told the House of Commons standing committee on Canadian heritage that Hockey Canada has advised her that players who don’t take part in her reopened investigation will be banned from Hockey Canada and will be named publicly.

In May 2022, Hockey Canada settled a $3.55-million lawsuit filed in April by a woman who alleges she was sexually assaulted by eight former Canadian Hockey League (CHL) players following a Hockey Canada Foundation event in London, Ont., in June 2018.

The allegations have not been proven in court. The identities of the players allegedly involved and the alleged victim are not publicly known.

In her testimony, Robitaille said Hockey Canada contacted her firm shortly after the alleged assault and gave her a mandate to learn the truth of what happened and make policy recommendations to Hockey Canada.

WATCH | Robitaille says Hockey Canada will ban players who do not participate:

Robitaille appeared before a standing House of Commons committee examining allegations of sexual abuse in the sport. Robitaille said legal counsel for eight of the nine players with whom she hasn’t spoken told her they’re concerned about being pre-judged by Hockey Canada.

But the third-party investigation was unable to interview all of the 2018 world junior hockey team players who were at the event in the subsequent months, so it presented a preliminary report and recommendations to Hockey Canada in September 2018. The investigation eventually closed with an agreement between Henein Hutchison and Hockey Canada that it could be reopened at any time.

In the meantime, the case has prompted unprecedented scrutiny of hockey culture and Hockey Canada as an organization. Minister of Sport Pascale St-Onge and Prime Minister Justin Trudeau have criticized Hockey Canada since the case became public in May.

In her testimony, Robitaille acknowledged the public anger the case has ignited.

“I appreciate that it’s very frustrating to Canadians that we don’t have an outcome yet,” Robitaille told the committee.

“My investigation is taking time, but justice and fairness sometimes take time.”

Robitaille provided several new details about the investigation to MPs at the committee. While Hockey Canada executives previously told the committee that most players at the London event did not participate in the initial investigation, Robitaille said 10 out of 19 gave interviews.

She said the nine who chose not to participate advised her through their lawyer that they would not participate until the London Police Service concluded its criminal investigation of the incident, which started in July 2018. The London police closed their investigation without charges in February 2019.

Robitaille said she still could not interview the players after that point because the alleged victim said through her lawyer that she would not provide a statement recalling her version of what happened in June 2018 to the investigation.

Robitaille said that without that statement, she was “not prepared” to arrange interviews with the players and the investigation went dormant.

“I was not prepared to interview those players absent the complainant’s version of events,” Robitaille told the committee.

“As a matter of due process, I could not interview players without giving them fair notice of what was alleged against them.”

Robitaille said that, earlier this month, she received notice that the complainant would provide a statement. Investigators now have the statement and the investigation is active again.

Hockey Canada executives have told the committee that while players were encouraged to participate in the initial stage of the third-party investigation, they were not required to do so.

But Robitaille said the organization has now told her that players who don’t participate will be banned from Hockey Canada and that the ban would be made public.

Robitaille stressed that the investigation is ongoing.

Robitaille added that legal counsel for eight of the nine players with whom she hasn’t spoken told her the players are concerned that some politicians and Hockey Canada officials already have decided they’re guilty.

“They have expressed concerns about my investigation, particularly as it relates to comments made by politicians and members of Hockey Canada. They have a concern that the issue has been pre-judged,” she said.

“I am attempting to address those concerns and assuage those concerns, and I hope that I will receive voluntary compliance with my investigation.”

London police announced last week that they will reopen their investigation into the alleged assault.

Hockey Canada said last week it would no longer use a fund maintained by membership fees to settle sexual assault claims.

The organization announced Monday that it will commit to a number of other changes, including enhanced training focused on masculinity, consent and toxic behaviours and a universal code of conduct to prevent and address maltreatment in the sport.

Members of Canada’s 2003 world junior team are also facing an accusation of group sexual assault from 2003.

The standing committee on Canadian heritage heard from numerous witnesses today, relating to an alleged sexual assault by Hockey Canada players in 2018. The testimony reveals Sport Canada knew of the allegations in 2018, but didn’t inform the sports minister of the time. Minister of Sport Pascal St-Onge says ‘Hockey Canada leadership should ask themselves’ if they’re the right group to lead change.

Appearing before the committee Tuesday, St-Onge said the news about the fund and the 2003 allegation has damaged Hockey Canada’s reputation.

“Our level of trust in Hockey Canada is extremely low now,” St-Onge said.

“These revelations illustrate a deep, toxic culture that allows people to act with impunity.”

St-Onge pointed out that the government recently established a new regulatory body, the Office of the Sport Integrity Commissioner, which can hear and investigate complaints from Canadian athletes.

Canadian sports organizations will have to subject themselves to the new watchdog before April 2023 or risk the loss of federal government funding.

St-Onge said she hopes changes to hockey culture off the ice will have implications for the sport.

“Hockey Canada must also take this situation as an opportunity to make a fundamental shift on the underlying violence in the sport, including issues such as racism, concussions and fighting on the ice,” St-Onge said.

Hockey Canada CEO Scott Smith is set to testify before the committee on Wednesday, along with former CEO Tom Renney, who was in the position from 2014 to June 2022.

On Tuesday, retired NHL player Sheldon Kennedy, who has spoken out against bullying and abuse in sport, called on Smith and other members of Hockey Canada’s leadership to resign.

“[Having] the same people with a new plan expecting different results is the definition of insanity,” Kennedy said in a statement posted on his Twitter account.

Sport Canada knew of allegation in 2018

Michel Ruest, a senior director of Sport Canada, told the committee the federal organization was made aware of the alleged sexual assault in 2018 but did not follow up with Hockey Canada at the time.

St-Onge has said she did not know of the allegations until this year.

Several MPs asked Ruest why Hockey Canada’s federal funding was not cut before June of this year, and why there was no follow-up on the case.

Sport Canada knew about Hockey Canada allegations as early as 2018

Sport Canada, a federal department, knew in 2018 about sexual misconduct allegations at Hockey Canada, but did not investigate, an official tells a House of Commons committee. Meanwhile, the federal minister of sport testifies that she was not informed until last year.

“So there was this allegation made, you were made aware of it on June 26 [2018], and for four years not once did you or your organization follow up with Hockey Canada about these allegations?” Conservative MP John Nater asked Ruest.

“It wasn’t necessarily surprising to us that the investigation was still ongoing. What surprised us was that we hadn’t had enough updates.”

“They’ve lost confidence in Hockey Canada, they’re losing confidence in Sport Canada, because we’re not seeing the kind of attentive followup that actually means these policies that are put into place are more than just vague words.”