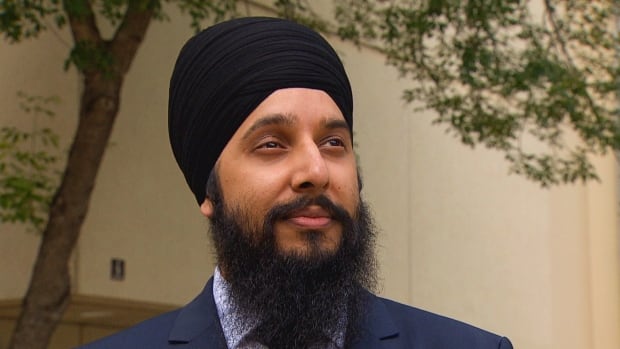 An Edmonton articling student set to be called to the bar next month is suing the province and the Law Society of Alberta because he says swearing a mandatory oath to the Queen would contradict his religious beliefs.

Prabjot Singh Wirring is a devout Amritdhari Sikh. He says he made an absolute oath and submitted himself to Akal Purakh, the divine being in the Sikh faith, and cannot make a similar allegiance to another entity or sovereign.

“For me, it’s a fundamental part of who I am as a person. The requirement to take that oath of allegiance would require me to renege on the vows and the oath that I’ve already made and [do] a lot of damage to who I am as a person and to my identity,” Wirring told CBC News.

In Alberta, provincial legislation requires lawyers swear an oath to “be faithful and bear true allegiance to Her Majesty Queen Elizabeth II, her heirs and successors.”

Wirring’s legal challenge is being heard in Court of Queen’s Bench. He’s seeking to be exempt from the oath.

Wirring says he hoped the province would make an exception for him considering other provinces, like Ontario and British Columbia, have opted to make the oath optional or offer a different oath.

“Inclusion is a collective responsibility of the profession, of our community and society in general. But unfortunately, a lot of the time this burden falls on racialized people,” he said.

WATCH | Wirring talks about why the oath conflicts with his beliefs:

Prabjot Singh Wirring, who is challenging the province and the Law Society of Alberta, describes how swearing a mandatory oath to the Queen goes against his Sikh faith.

Although Wirring initially tried to negotiate with the Law Society of Alberta, he says he soon realized the oath was legislated and he would have to take up the issue with the provincial government.

A spokesperson for the province declined to comment because the matter is before the courts.

The Law Society of Alberta said in a statement that the issue is for the province, because any change must be legislated.

In court Thursday, the Crown motioned to strike or dismiss the claim, stating that the issue has been decided in other cases.

Wirring’s lawyer Avnish Nanda told CBC News he finds it frustrating the province is unwilling to make an exception.

“There’s no willingness on the part of the minister or the Alberta government to back down. Either you make the oath of allegiance to the Queen, or you can’t practise law in Alberta,” Nanda said.

The government’s statements of defence are set to be filed by July 15, with the court hearing after Oct. 7.