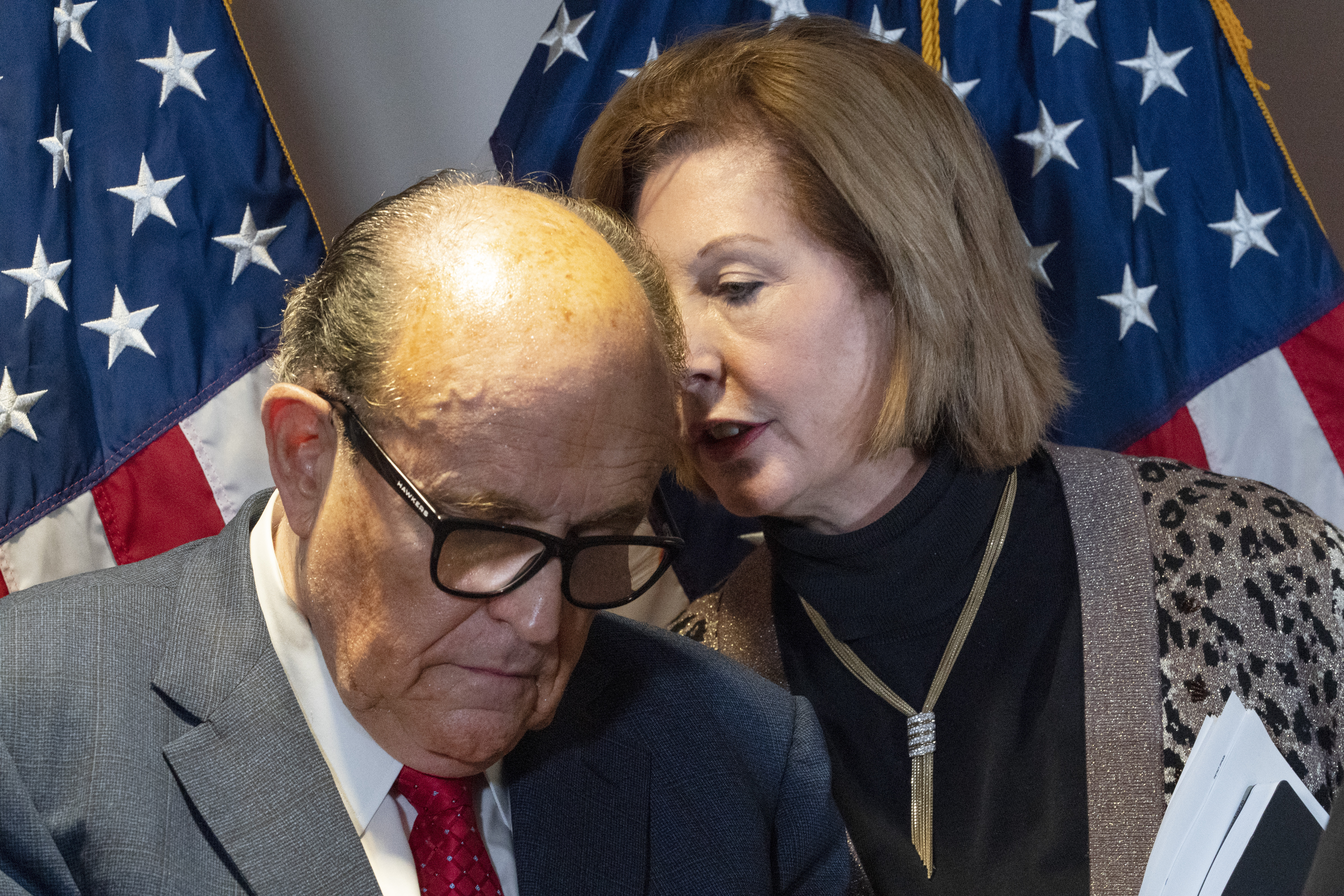 Haller’s trajectory — from rebuked purveyor of baseless claims to a go-to attorney for MAGA extremists — infuriates many liberal activists, including some groups who are targeting the lawyers for discipline, and alarms some nonpartisan specialists in legal ethics. They say those who helped legitimize the former president’s lies should not be allowed to use it as a foundation to build their legal practices, lest it serve as an incentive to profit from ever more outlandish claims that shake the confidence of Americans in the integrity of U.S. elections and endanger democracy.

In total, at least 16 lawyers who represented plaintiffs in five federal lawsuits promoting Trump’s baseless election fraud claims in the key battlegrounds of Michigan, Georgia, Wisconsin and Arizona remain in good standing or have no record of disciplinary action with their respective bar associations or licensing authorities, according to a POLITICO review.

Fourteen of them have since engaged in additional work in support of the election fraud conspiracies or conspiracists behind Trump’s attempt to remain in power despite losing the election to President Joe Biden. These include defending accused Jan. 6 rioters, consulting for partisan election “audits” or partaking in advocacy or legal cases sowing doubts about the integrity of the nation’s elections, POLITICO found.

Powell and Giuliani are the most well-known national legal voices who promoted conspiracies fueling the violent attack on the Capitol. Efforts to reach them were unsuccessful.

Powell, in November of 2020, said she would “release the Kraken” by providing evidence of widespread voting fraud proving Trump won the election. In fact, all of the suits were dismissed within days by judges appointed by both Democratic and Republican presidents. But in the process, Giuliani and Powell brought together a pool of attorneys who were willing to push Trump’s lies into court.

Now, however, many legal experts consider this network of attorneys a risk to future orderly elections administration and argue monetary penalties are an insufficient deterrent, simply because the lawyers involved can easily raise funds from disgruntled Trump supporters who may believe and are eager to spread the election lies.

“These lawyers have to be stopped from practicing law. It’s that simple,” asserts David Fink, an attorney leading the charge to disbar the attorneys in Michigan, including Haller. “They disregarded their oath, they told lies to the court and they spread the ‘Big Lie,’” said Fink.

In arguing that monetary fines are not sufficient deterrent, Fink cited a report that Powell raised $14 million by spreading baseless claims about election fraud, including through the lawsuits.

Fink is aligned with The 65 Project, a new bipartisan group spending millions to try to disbar 100 lawyers who worked on Trump’s post-election lawsuits. Its initial round of ethics complaints targeted top names on Trump’s team, filed with their respective state bars in March. The group is now gearing up to file a wave of complaints against lesser-known attorneys who filed legal cases on baseless evidence, Michael Teter, the group’s director, confirmed.

It’s unclear how many state bar associations are pursuing any kind of disciplinary action, or whether they have rejected complaints, because most require that investigations remain confidential. Most states that do provide disciplinary records online only post the final opinions or orders.

POLITICO contacted bar associations or regulatory boards responsible for disciplinary actions in Washington, D.C., Michigan and Wisconsin, where a number of the lawyers are registered. They all declined to comment, citing confidentiality rules.

In addition to being one of nine attorneys who represented plaintiffs in the Michigan case, Haller was involved in four similar cases dismissed in other states, including as a “lead” attorney in Arizona, according to the court docket. Similar to the Michigan case, the Arizona suit raised questions about ballot tampering and hacked voting machines, including a statement attributed to an alleged former military intelligence expert only identified as Spider. A judge dismissed it without a hearing, stating plaintiffs were “sorely wanting of relevant or reliable evidence.”

In an appellate brief filed last February in Michigan, the attorneys involved in that case stated they are targets of a partisan smear campaign.

“A Democrat Governor, a Democrat Secretary of State, and a Democrat Attorney General have joined a Democrat-appointed, Democrats-confirmed judge to ask a disciplinary body appointed and superintended by a Democrat-controlled state entity to kill the careers of Republican lawyers for advancing what is a mainstream Republican position on the 2020 Presidential Election.”

Although judges reviewed written claims and documentation before dismissing her cases, Haller argues her team never got to make its case before the judge in Arizona, similar to what happened in other cases.

“There were no evidentiary hearings held, and an old expression, ‘Absence of Justice leads to Strife’ comes to mind; just ask the George Floyd protesters about that. I personally had nothing to do with Jan. 6,” she said in response to emailed questions from POLITICO.

In dismissing the case, Judge Pamela Pepper stated: “Federal judges do not appoint the president in this country. One wonders why the plaintiffs came to federal court and asked a federal judge to do so.” Dean has been representing former Wisconsin Supreme Court Justice Michael Gableman, who is conducting a partisan audit of Wisconsin’s 2020 election results and has called for decertifying the state’s Electoral College votes after accusing Democratic leaders of large cities of fraud.

Such audits are a way of continuing the fight over 2020, even after courts have dismissed the cases. They have emerged as another source of work for pro-Trump attorneys.

Dean did not respond to a request for comment.

David Levine, a former Boise, Idaho, elections director, is among those in support of harsher punishment for lawyers who continue to fan the flames of election controversies long after they’ve been discredited. Levine is now a fellow for election integrity at the Alliance for Securing Democracy, part of the German Marshall Fund, a nonpartisan policy organization.

“If these folks aren’t held accountable, they’ll feel emboldened to continue to engage in actions that not only erode trust in the legal profession and integrity of elections but endanger lives of the American people,” he said.

“We saw in 2020 how false election information could not only fuel an insurrection but cause bodily harm and loss of lives,” said Levine. “After Watergate, we saw the legal profession be at the forefront of ethics reform. It’s dramatically different from what we’re seeing here,” he said.

‘Claims not backed by law’

U.S. lawyers have substantial leeway in filing court cases and in what they say outside the courtroom. Still, state bar associations generally try to self-police the legal profession according to a common set of rules that prohibit attorneys from bringing cases unless “there is a basis in law and fact for doing so that is not frivolous,” as the American Bar Association states.

And in Michigan, Rules of Professional Conduct stipulate that a lawyer may not knowingly “make a false statement of material fact or law” or “fail to correct” such a statement.

According to a pending complaint filed by a coalition of several Michigan lawyers with the Michigan Attorney Grievance Commission, the team in the case involving Haller not only made numerous false assertions but “notably failed to disclose to the court that their false factual claims had been dismissed in state courts” prior to filing the suit. According to that complaint, when presented with an opportunity to defend their claims, the attorneys “voluntarily” dismissed the case rather than offer a “factual defense.”

In her sanctions order statement, Parker, the judge, stated: “While individuals may have a right ‘within certain bounds’ to make baseless allegations of fraud in the public, attorneys cannot ‘exploit their privilege and access to the judicial process to do the same.’” Parker continued: “The attorneys abused the well-established rules applicable to the litigation process by proffering claims not backed by law; proffering claims not backed by evidence.”

‘The mind of the lawyer’

Legal experts say the key to disciplining lawyers for frivolous cases is determining whether they knew the facts and arguments on which they were bringing their cases were false.

Ben Ginsberg, among the nation’s most prominent conservative election lawyers, said, “You have to get into the mind of the lawyer and whether they thought and they had reasonable evidence to believe the charges they brought had some shred of credibility to them.”

Barry Richard, who represented former President George W. Bush in litigating the disputed 2000 election in Florida, agreed it would likely have to be proven the attorneys knowingly submitted false complaints in order to take more significant action such as the revoking of law licenses.

Yet, while state bar association rules differ, “anybody who took the position, with no basis, that there was fraud committed has violated a bar rule — no matter what state it is — and is subject to discipline,” said Richard.

Members on the bipartisan House panel investigating the Jan. 6 insurrection have repeatedly warned that challenges to the nation’s system of nonpartisan election administration remain a significant threat.

That’s because, regardless of the ultimate penalties, if any, for Trump and his inner circle, his successful campaign to sow doubts about the security of U.S. elections has inspired GOP candidates across the nation to run on similar platforms. In two out of three governor and secretary of state contests, there is an “election denier” running, according to States United Democracy Center, a nonpartisan organization that promotes secure elections.

Barry Burden, director of the Elections Research Center at the University of Wisconsin-Madison, argued that it’s important to take action against attorneys fanning the flames of election conspiracies before they can rely on officeholders to support the false claims.

Should various election deniers prevail in their campaigns, Burden said, “if a lawsuit is brought, as frivolous as it might be, [the pro-Trump lawyers] may have an ally in office who may be willing to testify in favor” of it or advance it in multiple ways, he said.

“It is alarming that that network of election deniers remains active,” said Burden.

Many of Powell’s co-lawyers remain actively promoting conspiracies around 2020.

Stefanie Junttila, who’s also gone by Stefanie Lambert, officially appeared as an attorney of record on behalf of the plaintiffs in the Michigan case. Despite the sanctions order, Junttila continues to post on her Telegram channel what she calls “evidence” of election fraud in 2020 and is representing Sheriff Dar Leaf, who is suing Michigan’s attorney general and secretary of state for obstructing his own self-proclaimed investigation into voter fraud. In 2020, Leaf attended a rally related to COVID restrictions alongside a militia member later accused of plotting to kidnap Governor Gretchen Whitmer.

As recently as mid-April, Junttila shared on social media a video of her appearance on the Stew Peters Show, in which she claims to have evidence of fraud committed in Delaware County, Penn., by union-aligned elections officials. And on May 5, Junttila filed a brief appealing her sanctions, insisting there “remain significant, legitimate concerns” with the election, which had ”significant irregularities.” Juntilla did not respond to a request for comment.

For her part, Powell, too, has been unrepentant.

In a July 2021 hearing before Parker, Powell stated: “We would file the same complaints again. We welcome an opportunity to actually prove our case.”