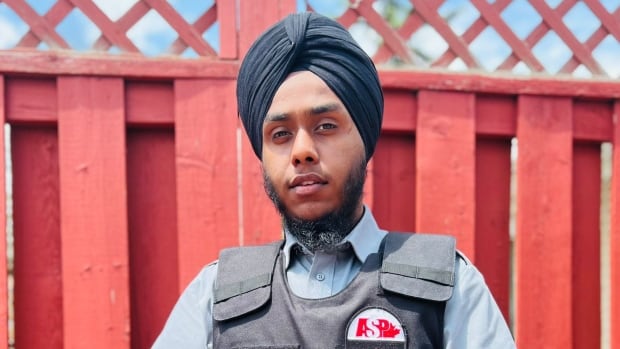 The City of Toronto is directing its contractors to reinstate any security guards who lost their jobs because they were required to shave their beards in order to wear N95 masks at work.

The directive comes after a complaint by the World Sikh Organization (WSO) that security guard contractors for the city were not accommodating employees who have facial hair for religious reasons and cannot wear N95 masks.

Security guards are required to wear N95 masks when they are working at city homeless shelters fighting COVID-19 outbreaks, according to a public health requirement.

“The City has directed these contractors to accommodate their employees who have requested religious exemptions and to reinstate any employee whose employment was terminated, immediately,” the city said in a news release on Monday.

“As part of its investigation, the city will be looking at its legal options, up to and including terminating the contracts of any contractors found to be in violation of city policy or human rights legislation.”

The city said it has contracts with many large security guard organizations and employees who have facial hair for religious reasons can be accommodated in other city settings, including shelters that are not in outbreak.

According to the city, it is working with security companies contracted to its shelter system to ensure these accommodations are provided and that no contract employee will be unable to work due to public health requirements.

Earlier on Monday, the WSO demanded that the city change what it called a “discriminatory” rule included in its contracts that require security guards in some settings to be clean-shaven.

The organization called on the city to compensate and order its contractors to reinstate about 100 bearded Sikh guards lost their jobs due to the requirement.

The WSO said the public health requirement has been in place at congregate settings since January and the security guards work for such contractors as GardaWorld, ASP Security and Star World.

The city confirmed that employees and contractors working with its Shelter, Support and Housing Administration (SSHA) department must wear a N95 mask and must be clean-shaven. It said the masks provide effective protection against COVID-19 transmission.

But the city said the WSO’s complaint stems from contractors failing to accommodate their own employees.

Shaving beard ‘like peeling off my skin,’ guard says

Sikh security guards have been struggling with the rule.

“If you ask me to clean shave my beard, it’s like peeling off my skin.”

Anand said he applied for a religious accommodation when he was notified of the requirement last month, but was told that would mean being relegated to a lower position with the company with lower pay.

He said his previous position working as a security guard at city respite centres was recognized as a “skilled” job by the federal government and helped him work toward permanent residency. The new jobs offered, however, do not.

He said he and other guards — many who are also working toward permanent residency — have to choose between those new jobs, finding a different job, getting laid off, or shaving their beards.

CBC News has reached out to ASP Security and other companies with questions about how they are implementing the city policy.

In an email to CBC News, GardaWorld said all employees who were unable to meet this health and safety requirement set out by the city were offered “other and equivalent opportunities within the organization” until this measure is lifted.

For Sikh devotees, leaving hair uncut is an important tenet of their faith, the WSO said.

Balpreet Singh, a lawyer with the organization, said Toronto’s rule feels particularly discriminatory because this policy is being brought in while almost all other pandemic restrictions have been dropped in Ontario — including most mask mandates.

“These security guards served at the height of the pandemic without these rules, when things were at their worst,” Singh said.

“But now when, you know, vaccines are very common and things are opening up, they’re being told: ‘No, you can’t serve here because you’ve got a beard.'”

Singh said he’s repeatedly contacted the city and council members. He said he sent an official letter to the city on June 7 to “work with its security contractors to find a solution.”

The city is it investigating the complaint by the WSO and said all of the workers affected are employed by contractors and not its own corporate security division.

“City staff work to ensure policies are inclusive, and policies are assessed routinely to ensure they respect the rights and freedoms of all those who work for the city — be they full-time or part-time employees, or employees of contractors,” the city said in the release.

Earlier, the WSO’s Singh said his organization has attempted to work with contractors and contact the city in recent months to bring in alternative options to keep Sikh guards on the job and keep them healthy, but those efforts have been met with “nothing more than platitudes.”

Singh said his organization will consider legal action if there’s no change.

“This is clearly a violation of human rights protections in Ontario.”