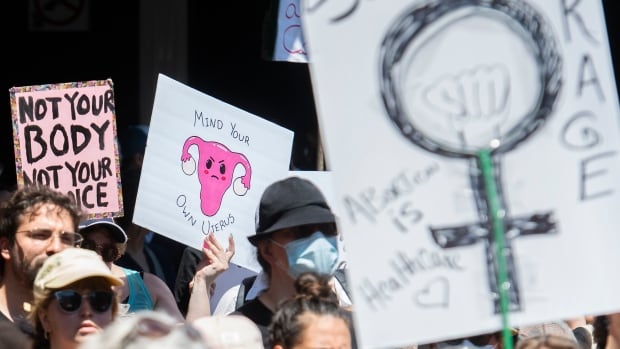 Canada has no abortion right law. Does it need one?

After the U.S. Supreme Court struck down its 1973 Roe v. Wade decision Friday — the ruling that had, for decades, guaranteed a woman’s right to get an abortion across the United States — Liberal politicians north of the border were were quick to suggest that Canadians shouldn’t take their freedoms for granted.

“No country in the world, including Canada, is immune to what’s going on in the United States,” said Foreign Minister Melanie Joly, as other ministers and MPs chimed in with similar warnings.

Prime Minister Justin Trudeau has repeated time and again that every woman has the right to an abortion in Canada, promising Friday to defend those rights.

But in a country that has no legal framework governing abortion, what does that actually mean — and why are abortion-rights advocates urging Trudeau to avoid enshrining that right into law, once and for all?

Here’s what you need to know.

What is the legal status of abortion in Canada?

Abortion has been legal in Canada since 1988, when the Supreme Court decided in R. v. Morgentaler that a law that criminalized abortion was unconstitutional.

Since a 1969 reform under Pierre Trudeau’s Liberal government, Section 251 of the Criminal Code had narrowly allowed for abortions in cases where a committee decided a woman’s health or life was in danger, but it still penalized health service providers and women themselves for participating in other abortions.

In a 5-2 decision, the court upheld an acquittal of abortion advocate Henry Morgentaler and struck down the existing law.

“Forcing a woman, by threat of criminal sanction, to carry a fetus to term unless she meets certain criteria unrelated to her own priorities and aspirations, is a profound interference with a woman’s body and thus a violation of security of the person,” read the majority opinion by chief justice Brian Dickson.

Today, abortion falls under provincial health-care systems as a medical procedure, meaning that access to the procedure varies considerably from place to place.

The Supreme Court’s decision left a legal vacuum, so it threw the ball back in Parliament’s court to figure out whether any “reasonable limits” should be applied.

Under the majority Progressive Conservative government of Brian Mulroney, the House of Commons passed a law in 1990 that would have made it a criminal offence to induce an abortion unless a physician deemed that the woman’s life or health was likely to be threatened otherwise.

But the bill died in the Senate, where the vote came to a rare tie.

No government has since attempted to legislate on the issue.

Canadians are making their voices heard following the overturning of the landmark Roe v. Wade Supreme Court ruling in the U.S.

Is anybody talking about introducing an abortion bill today?

In the Morgentaler decision, the Supreme Court did not explicitly state that access to abortion is a fundamental right — and no other Canadian court has said so since.

When a leaked copy of the decision overturning Roe v. Wade was released in May, reporters asked Trudeau whether he would consider putting legislation on the table to enshrine such a right.

He left open the possibility, but said his government wants to prevent a situation where rights are rolled back by future governments or court decisions.

The only federal abortion-related legislation introduced in recent years have been private member’s bills by Conservatives that would outlaw certain types of abortions or criminalize the killing of a fetus during an attack on a pregnant woman.

Such bills have not passed.

What’s the case against formally enshrining a right to abortion?

Experts and advocacy groups have roundly criticized the idea of creating any sort of stand-alone law on abortion, saying that this could lead to a plethora of unintended consequences.

“We have no specific legislation for a hip replacement or other medical procedures, so why would we need one for abortion?” said Julia Tetrault-Provencher, chair of the national steering committee of the reproductive rights working group of the National Association of Women and the Law.

Even if the law simply enshrined abortion as a right, putting it on the books could open the door to subsequent governments’ more-restrictive amendments, advocates fear.

“We’ve seen that the power of very small but vocal anti-choice and conservative groups can make a huge impact, and we just don’t know what the country’s going to look like in the future,” said Jill Doctoroff, executive director of National Abortion Federation Canada.

As soon as a new law passed, court cases would be brought to test its constitutionality, said University of Ottawa law professor Daphne Gilbert — creating “legitimacy and a platform” for anti-abortion activists to bring their cases to the courtroom.

Federal legislation could also raise a division of powers debate and give provinces the bandwidth to talk about regulating or restricting abortion in a bigger way, Gilbert said, which could jeopardize advocates’ hard-fought gains.

“There’s absolutely no upside and a whole bunch of downside.”

Are there alternatives to legislation?

While advocates are pleading for Trudeau to keep his powder dry on the legislative front, they still want his government to be active in improving access to abortion in Canada.

In 2021, the Liberals promised $45 million over three years to improve sexual and reproductive health support, information and services, which Tetrault-Provencher said should be made a permanent fund.

WATCH | Abortion access a major issue in parts of Canada:

While there are no laws restricting access to abortion in Canada, access remains a major issue in parts of the country, and not all women who want one can get one.

Under the Canada Health Act, Ottawa has the authority to claw back provincial health transfers when provinces provide inadequate access to services.

Trudeau’s government has already done that on a minor scale, withholding $140,000 from New Brunswick for failing to provide funding for abortions at a Fredericton clinic — but Gilbert said that’s not enough.

“That’s peanuts in an overall health budget. I think they could strengthen the carrot and stick of the regulatory power.”